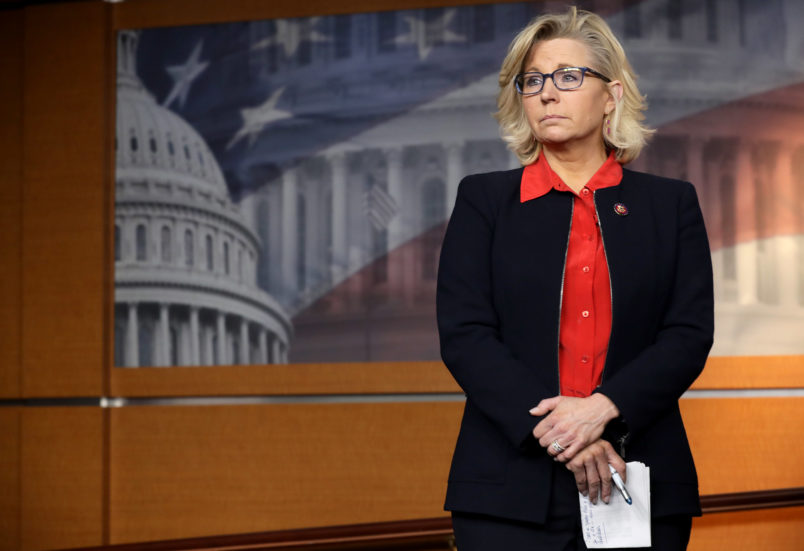 WASHINGTON, DC – FEBRUARY 13: House Republican Conference Chair Rep. Liz Cheney (R-WY) attends a news conference following a GOP caucus meeting at the U.S. Capitol Visitors Center February 13, 2019 in Washington, DC. House Minority Leader Kevin McCarthy (R-CA) said that he supports the framework of a bipartisan spending deal that would avert another partial federal government shutdown but is waiting to read the bill before deciding on whether he would vote for it. (Photo by Chip Somodevilla/Getty Images)

The new PAC has painted itself as a Trumpworld fundraising effort that is leading the charge to launch a primary challenge against Cheney after the conference chair drew ire for her unpopular vote earlier this month to impeach Trump while encouraging Republican colleagues to do the same. At the time she called the decision a “vote of conscience.”

A majority of Republicans in the lower chamber have signaled they would support  removing the third-ranking House Republican from her position as conference chair on a secret ballot.

While Trump loyalists have called on Cheney to step down as conference chair, and even threatened boycotting if she remains in power, House Minority Leader Kevin McCarthy (R-CA) said last week that he continued to support Cheney. On Sunday he said he had some reservations that he said he hoped could be hashed out in a conference meeting.

While Cheney seeks to cool opposition, Lewandowski’s group appears to be the first national GOP organization to formally line up against her in a potential unseating effort.

According to Axios, Lewandowski has been sending out hundreds of fundraising text messages on behalf of his new PAC, Fight Back Now America. Some of the texts obtained by the publication target Cheney directly. One text declared that the Wyoming congresswoman “must be removed from GOP Leadership & Primaried!”

Another text from the group called her out among a group of “spineless Republicans in Washington” who, ironically, must be held “accountable” for turning on Trump. According to Axios, the texts link to the PAC’s donation page on the GOP fundraising platform WinRed.

Aside from the fundraising ouster by Lewandowski’s group, Cheney will already be facing at least one Republican primary challenger — Wyoming state senator Anthony Bouchard, who announced his bid for her seat last week.

Rep. Matt Gaetz (R-FL) a consistent backer of the former president told reporters on Monday that he would be traveling to Cheyenne, Wyoming for an event to “talk about the failed leadership of Liz Cheney.”

Gaetz suggested that while the conference chair was charged with carrying the message of the party, “most of the members of the Republican Conference don’t believe that Liz Cheney speaks for them.”

“It is untenable for her to remain in the position of Conference Chair when you have most of the Republican Conference saying in conversations with colleagues that she does not speak for our team,” Gaetz said.

“While Cheney seeks to cool opposition, Lewandowski’s group appears to be the first national GOP organization to formally line up against her in a potential unseating effort. “